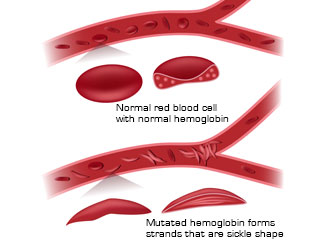 A blood analysis can detect for abnormal hemoglobin variants, including HbS, HbC and HbE. This can be done through several methods, including isoelectric focusing, high performance liquid chromatography and gel electrophoresis. Peripheral blood smears can also be used to assess the levels of sickled cells, neutrophils and platelets in a blood sample – all of these blood components are increased in individuals with sickle cell anemia.

Genetic Analysis of the HBB Gene

Molecular diagnosis of sickle cell disease is achieved by DNA analysis of the HBB gene to identify the mutations resulting in the three most common abnormal hemoglobins – HbS, HbC and HbE. These mutations are c.20A>T for HbS, c.19G>A for HbC and c.79G>A for HbE. Each mutation changes the amino acid sequence of the β-globin protein, affecting the hemoglobin structure and function.

Newborn testing for sickle cell disease is standard throughout North America and routinely involves a simple blood test. If both parents are carriers (sickle cell trait) there is a 1 in 4 chance of having a child affected by sickle cell disease, hence it is possible to perform the sickle cell disease test on a fetus before birth through chorionic villus sampling (at 11 weeks) or amniocentesis (at 16 weeks).

Next, Treatment of Sickle Cell Disease »